If I were an emperor in ancient China and faced against pandemic of Flu-like disease from Wuhan, immediately I would send thousands of soldiers to Tibet to exploit hundreds of tons of Cordyceps there. The soldiers should bring back them all to China. And I gave Cordyceps to my people, because Cordyceps has strong effect to empower immune system and also to improve lung function. These two effects are essential to conquer any types of “Flu”, including COVID-19. 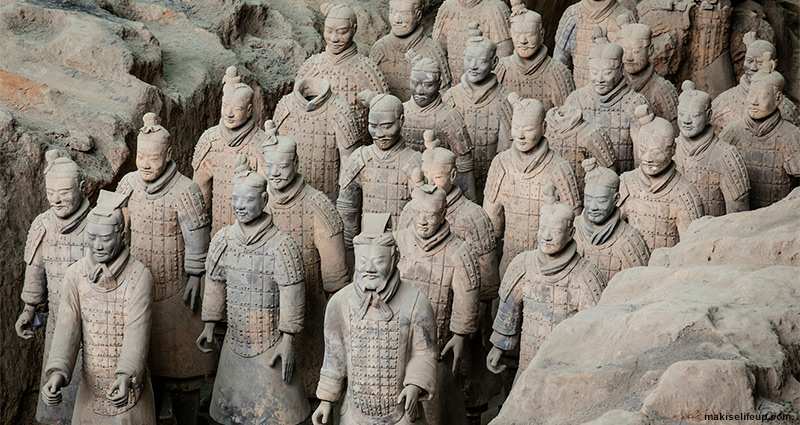 Cordyceps is a genus of parasitic fungi that grows on the living larvae of insects. In Japanese it is called “

It grows mainly in the meadows above 3,000 to 4,000 meters in the Himalayan regions such as Tibetan Plateau, Nepal, Bhutan, and also in Sichuan, Yunnan of China. But if you were very lucky, you could find Cordyceps like the picture in your country, too. The photo was taken in Shirakami-Sanchi that is a mountainous area located in northern part of Japan.

I’ve been studying mushrooms for medical use since more than 25 years ago, and have come to the conclusion that this fungus has the most versatile health effects clinically for humans and brings about the quickest effects among so called medicinal mushrooms. Due to its excellent effects for health, in TM (Tibetan Medicine) and in TCM (Traditional Chinese Medicine), doctors have been prescribing Cordyceps. And nowadays even in mainstream medicine doctors began to use Cordyceps as safe adjuvant treatments for cancer, Alzheimer’s disease, diabetes, and cardiovascular problems, etc. Therefore, the demand for Cordyceps is increasing every year, and the natural Cordyceps in Qinghai-Tibetan Plateau, Bhutan, Sichuan, Yunnan are over-collected. Consequently, the prices have skyrocketed.

15 years ago I went to Tibet and bought Cordyceps. I don’t remember exactly the price, but I got surprised at the expensiveness compared with the prices of daily commodities. And when I flew back to Japan from Lhasa via Beijing, my precious Cordyceps were all stolen at Beijing Airport!! Cordyceps used to be worth more than 4 times its weight in silver. Now (2020) 1 gram of Cordyceps costs more than $80. It is called ‘Soft Gold’. In addition, lots of fake or very poor quality Cordyceps are on the market in China, making it difficult to get genuine ones. Therefore, various efforts have been done to develop technique for artificial culture of Cordyceps. Finally, in 1993 the team of Japanese and Chinese researchers succeeded in the artificial culture of Cordyceps militaris by using aseptically-cultured silkworms.

In the United States, too, supplements of Cordyceps are sold. But the most of them are mycelia (root part) cultured in a synthetic medium, or fruiting bodies cultured in a medium such as cereals or grains. The mediums are not larvae of insects. However, if the medium is not a living creature, the most important components of Cordyceps for health are missing.

The Japanese new method is infecting living silkworm pupae with fungi of Cordyceps militaris and growing it using the pupae as a medium, similar to the mechanism by which natural Cordyceps grow. 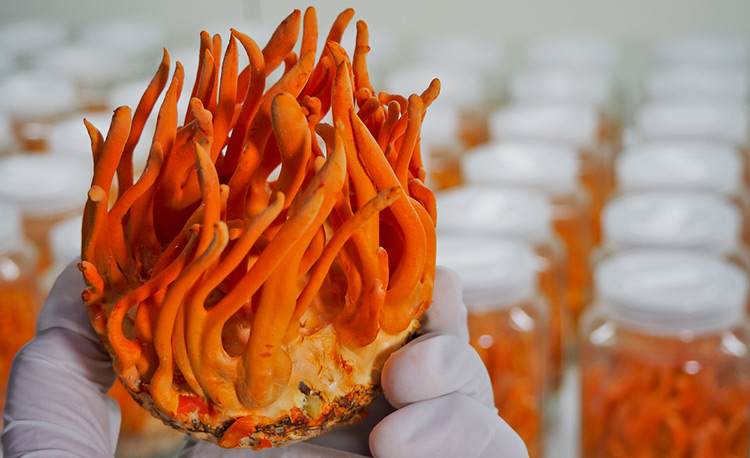 Cordyceps has been shown to increase the activity of natural killer cells and the ability to produce IL-2, and to increase the nonspecific immunity by activating the phagocytic ability of macrophages. In addition, antioxidant and anti-inflammatory effects, angiogenesis inhibitory effects, and direct suppression of cancer cell growth have been reported.

The main substance that exerts anti-cancer effect is Cordycepin.(see Fgure) that is contained much more in Cordyceps militaris than in Cordyceps sinensis.

Although in vitro, methanol extract of Cordyceps militaris stimulates primary neurite sprouting and extension of Neuro2A cells in a dose-dependent manner. And it alleviates decrease in cholinergic immunoreactivity in the hippocampus.
Cordycepin (3′-deoxyadenosine) is an adenosine analog. The structure of Cordycepin comprises a purine (adenine) nucleoside molecule attached to a ribose sugar (ribofuranose) moiety via a β-N9-glycosidic bond. These characteristics indicate that the protective effect of Cordycepin on the CNS may be closely associated with A1R.

Although in rats, Japanese researchers proved that Cordyceps militaris improves the survival of Dahl salt-sensitive hypertensive rats possibly via influences of mitochondria and autophagy functions.
Excessive salt intake causes high blood pressure. This is scientifically well proved, But we are consuming too much salt without even realizing it, because salt is hidden in instant foods and junk foods in particular. Many restaurants also use excess salt to stimulate palatability to attract more customers. We are living in too much ‘Salted Life’. Therefore, Cordyceps can help us from our unhealthy meal environment.

Cordycepin which is the main ingredient of Cordyceps militalis ameliorates cardiac hypertrophy via activating the AMPKα pathway and attenuates oxidative stress both in vivo in Cordycepin‐treated mice and in vitro in Cordycepin treated cardiomyocytes.
Nowadays heart failure is increasing with aging. To prevent it taking Cordyceps prophylactically is much recommended.

, published in 1694 wrote that Cordyceps could strengthen the kidney function. In the experiment of rats, extract of fruiting body of Cordyceps militaris was found to reduce membranous glomerulonephritis by attenuating oxidative stress and renal inflammation via the NF-κB pathway. Diabetics often suffer from renal function and may have to undergo dialysis. Therefore, Cordyceps is very much recommended to prevent the progress of diabetes.

A characteristic of blood components common to centenarians is that their CRP (C-reactive protein) value which indicates the degree of inflammation in the body is very low. Its normal range is below 0.3mg/dl, and the lower the better for longevity. When chronic inflammation lasts, it gradually induces deterioration of many organs, causing premature aging. I once saw a woman with 0.03 mg/dl CRP that is only one tenth of the normal level. She was 101 years old and very healthy, working in her shop every day.
Cordycerebroside A, the new cerebroside, along with soyacerebroside I and glucocerebroside inhibited the accumulation of pro-inflammatory iNOS protein and reduced the expression of COX-2 protein in LPS-stimulated RAW264.7 macrophages.

Cordycepin that is the most important substance contained in Cordyceps militaris is reported to suppresses the NF-κB (nuclear factor-kappaB), Akt, and MAPK (mitogen-activated protein kinases) signaling pathways that induces inflammation.
In addition, Cordycepin functions as a polyadenylation inhibitor to reduce inflammation.

Since hundreds of years ago Cordyceps has been used as an excellent remedy for weakness and fatigue by the residents in Tibetan Plateau, Nepal, and Bhutan to give them energy. The people know empirically its energy enhancing effects of Cordyceps. The key substance for energy production is Cordycepin. It is also called 3′-deoxyadenosine, and has a structure in which the hydroxyl group (OH group) has been deleted from the 3 ‘position of adenosine.

Adenosine is one of the nucleosides consisting of adenine and ribose, and is involved in energy transport as part of ATP and ADP, and in signaling as cyclic AMP. Therefore, one of the mechanisms of action of Cordycepin has an effect on the function of adenosine. So, Cordycepin is said to increase ATP by 30%, and athletes often take Cordyceps to enhance their endurance during exercise.

During convalescence of diseases, patients are recommended to take Cordyceps to recover from exhaustion of physical strength.
In both TM (Tibetan Medicine) and TCM (Traditional Chinese Medicine), Cordyceps has been used to improve fertility treatment in men. Cordyceps exerts the positive effect on sperm productivity, motility, kinematics, morphology, and enhancement of sexual activity. It contains various spermatogenic factors. Therefore, Cordyceps is called Himalayan aphrodisiac.